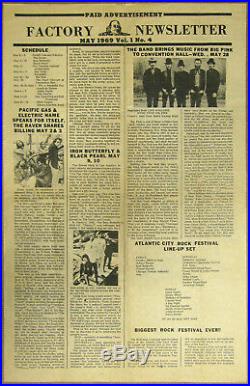 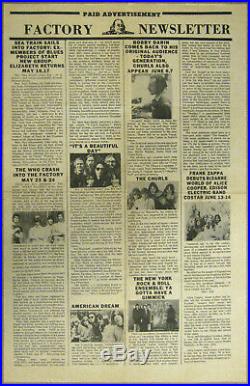 This is an ultra ultra rare and significant probably one-of-a-kind item! It is a guaranteed original (printed before the events) two-sided poster. It is very likely the only copy to have survived! In 1969 The Electric Factory in Philadelphia put out a handful of these, one each month announcing, advertising and promoting their upcoming concerts masquerading as a newspaper-like newsletter. They measure 11″ x 17″ and were folded, stuffed in envelopes and mailed to their mailing list instead of sending out the handbills they had previously sent to members of their list. They were laid out to appear like a page from a newspaper and state “PAID ADVERTISEMENT” at the top of one side. I don’t know if this was because of postal regulations for cheaper mailing or why this is there. In the upper left box of the “front” side of the poster is a schedule of upcoming shows at the Electric Factory. The rest of this side is laid out like articles about the various shows. This one, May 1969 Vol. 4 has the distinction of announcing THE WHO May 23-24, 1969, THE BAND on May 28 (at Convention Hall), Alice Cooper on June 13-14, 1969 and others including Iron Butterfly, Ray Charles, It’s A Beautiful Day, Bobby Darin and more. The amazing plus for this is that this also includes the first official announcement of the line-up for the Atlantic City Pop Festival, August 1-3, 1969 at the Atlantic City Race Track including the initial line-up of: Friday, August 1 – Iron Butterfly, Johnny Winter, Crosby Stills & Nash, Procol Harum, Chicago; Saturday, August 2 – JEFFERSON AIRPLANE, Creedence Clearwater, Crazy World of Arthur Brown, Butterfield Blues Band, B. American Dream; Sunday, August 3 – JANIS JOPLIN , Mothers of Invention (FRANK ZAPPA), Canned Heat, Moody Blues, Three Dog Night, Little Richard, Sir Douglas Quintet. A few of these would end up bing moved to other days and the GRATEFUL DEAD were added a bit later to the line-up. And this was BEFORE the Woodstock Festival!! The poster measures 11″ x 17″ inches and is printed on newsprint paper. It is in startlingly excellent condition, especially considering its age and the paper it was printed on. It’s been keep out of sunlight so the paper is supple and not at all brittle! It has folds from being folded to be inserted into an envelope and mailed but otherwise is NEAR MINT! Really clean and undamaged. It is guaranteed to be 100% original and authentic from the time period. If you are outside of the U. If you are interested in this kind of material please view my store, Concert Posters Plus, and sign up for my Store Newsletter. I add items frequently and also offer periodic sales / discounts and specials. Get notified when I run a special sale! The item “THE WHO Alice Cooper THE BAND Frank Zappa JANIS JOPLIN 1969 Concert Poster” is in sale since Wednesday, June 19, 2019. This item is in the category “Entertainment Memorabilia\Music Memorabilia\Rock & Pop\Artists W\Who\Posters”. The seller is “postermaniax” and is located in Brooklyn, New York. This item can be shipped worldwide.