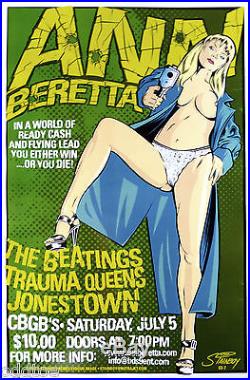 ANN BERETTA THE BEATINGS TRAUMA QUEENS JONESTOWN CBGB, NEW YORK Concert Poster. Ann Beretta is a punk band from Richmond, Virginia known for playing straightforward punk with small doses of rockabilly and country mixed into their sound. The band was formed in 1996 by Rob Huddleston, Leer Baker, Chris Rupp and Russ Jones. Leer and Chris later left the band. The band spent several years on tour playing with bands including Hot Water Music, ALL, the Bouncing Souls, Less than Jack. They have released albums on Fueled by Ramen and Lookout! However, after their 2001 release, New Union Old Glory , they left Lookout! To release their next album on with Canadian label, Union Label Group. At this point the band is on hiatus, while Rob and Russ focus on their current project, The Foundation Band. Leer and Chris left the band in mid 1999 to start Sixer. Danny is currently the bassist/vocalist in Red Angel Dragnet. Date: July 5, 2003 Performers: Ann Beretta, The Beatings, Trauma Queens, Jonestown Venue: CBGB, New York Designer: Greg “Stainboy” Reinel Edition: 75 Dimensions: 18″x12″ Five-color offset Singed & Numbered Currently we have several of these in stock. All of them are from the same edition of 75 however, the individual print number in the picture may not match what you receive. And learn about me. And my exlusive online store. Sign up for our newsletter. We add products weekly and always offer great deals! Can’t find something? I’ve probably got it or know where to get it. _gsrx_vers_308 GS 5.3.7 (308). The free listing tool. The item “ANN BERETTA, Venue CBGB, 2003, offset Concert Poster S/N, Greg Stainboy Reinel” is in sale since Thursday, February 07, 2013. This item is in the category “Entertainment Memorabilia\Music Memorabilia\Rock & Pop\Artists A\Other Rock & Pop Artists A”. The seller is “oddtoe” and is located in Hayward, California. This item can be shipped worldwide.