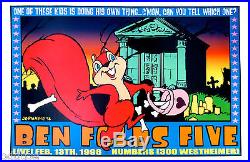 Signed & Numbered Concert Poster. Is most widely known as one of the leaders in the field of modern rock poster art. This involves the creating and production of promotional poster artwork featuring concerts, musical events, and musical releases by certain rock and roll artists. Jermaine Rogers has created these pieces of advertising since the year 1994. By 1996, due to growing workloads and collectible popularity in this field, Rogers abandoned his secular job to pursue the creation of poster art on a full-time basis. For the last few years, Jermaine has chosen to concentrate more on fine art, design, and other personal pursuits. Jermaine has designed nearly 800 posters for a wide variety of musical acts, including RADIOHEAD, NEIL YOUNG, TOOL, WEEZER, TORI AMOS, DAVID BOWIE, THE DEFTONES, THE MELVINS and literally hundreds of others. Ben Folds Five is an alternative rock trio formed in 1993 in Chapel Hill, North Carolina. The group comprises Ben Folds (lead vocals, piano, keyboards, melodica, principal songwriting), Robert Sledge (bass, contrabass, synthesizer, backing vocals), and Darren Jessee (drums, percussion, backing vocals, songwriter, and co-writer for some songs). The group achieved mainstream success in the alternative, indie and pop music scenes. The band is best known for the hit single “Brick” from their 1997 album Whatever and Ever Amen , which gained airplay on many mainstream radio stations. During their seven years together, the band released three proper studio records, one retrospective album of B-sides and outtakes, and eight singles. They also contributed to a number of soundtracks and compilations. Ben Folds Five disbanded in October 2000, apparently under amicable circumstances. The group reunited for a one-off concert on September 18, 2008, where they played their album, The Unauthorized Biography of Reinhold Messner , in its entirety. In 2011, Ben Folds Five reunited to record three tracks for Ben Folds’ The Best Imitation of Myself: A Retrospective. It was announced on Folds’ Twitter in January 2012 that the band has reunited to record a new album, released on September 18, 2012, titled The Sound of the Life of the Mind. As of March 1 of the same year, at least three tour dates have been added, including the Bonnaroo festival in Manchester, Tennessee, DeLuna Festival in Pensacola, Florida, and the Mountain Jam Festival in Hunter, NY. In July 2012 the band announced US and European tour dates for Fall 2012. Performers: Ben Folds Five. Venue: Numbers Night Club, Houston, TX. Dimensions: 11″ x 17″. Currently we have several of these in stock. All of them are from the same edition of 200 however, the individual print number in the picture may not match what you receive. And learn about me. And my exlusive online store. Sign up for our newsletter. We add products weekly and always offer great deals! Can’t find something? I’ve probably got it or know where to get it. The free listing tool. This is a FIRST printing, not a reproduction that you may be seeing at a lesser price. Jermaine’s work has steadily increased over time and it doesn’t seem to be slowing down. His early work is becoming very scarce and RARE! This print is a FIRST PRINTING, not a reprint. The prints were bought directly from Jermaine after he printed, signed and numbered them. They have been stored FLAT since the day we received them and have never been resold. The print is in PERFECT CONDITION, unless otherwise notated. Don’t be fooled by underpriced reproduction or bootlegs. The item “BEN FOLDS FIVE Original CONCERT Poster S/N by Jermaine Rogers, 1998, Squirrel” is in sale since Tuesday, February 05, 2013. This item is in the category “Entertainment Memorabilia\Music Memorabilia\Rock & Pop\Artists B\Other Rock & Pop Artists B”. The seller is “oddtoe” and is located in Hayward, California. This item can be shipped worldwide.