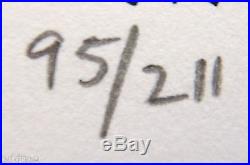 Tulagi’s, Boulder – CO. Signed & Numbered Concert Poster. Is there a cerebral connection somewhere between art and skateboarding? For some people skating is an art, for others art has nothing to do with skating. Then there are those who combine these two things to form a lifestyle. Lindsey Kuhn has found a way to turn his passions into career, and has been both skating and creating art for over three decades. He was born in Evanston, IL, but grew up on the coast of Mississippi where the now infamous Swamp ramp(s) stood for over ten years. In 1983 he began screen-printing t-shirts primarily to pay for maintenance of the massive ramp. Those simple t-shirts have ballooned into an internationally known company called SWAMP. Today Lindsey is best known for his silk-screened rock posters for hundreds of bands like The Melvins, Tool, Atmosphere, AC/DC and more. Swamp also does custom printing and publishes work for other artists. Lindsey moved to Austin, TX in 1990 and within a year started printing posters for Southern Californias Limagerie Gallery. Limagerie set up a small flat press shop in Austin produce rock posters for Frank Kozik, as well as, Serigraphs for other artists they represented. Such as Robert Crumb, Ed Roth, Robert Williams, Joe Colman, and others. While printing all this great art, Lindsey realized there was a demand for what he had been doing for years and seized the opportunity to learn from these lowbrow masters helping to revive the lost art of the Rock Poster. He has continued to create posters for over 20 years, keeping his D. Ethic alive by printing his own work as well as other artists from around the world through his print company called SWAMP, which is now located in Denver, CO. Are an American post-hardcore band led by Rick Froberg and John Reis, formed in 1999 in San Diego, California. Reis and Froberg had previously performed together in Pitchfork and Drive Like Jehu, after which Reis had found international success with Rocket from the Crypt. Hot Snakes disbanded in 2005 but reunited in 2011. Although they share sonic similarities with bands its members had previously been involved with, Hot Snakes’ sound is much more primal than that of Pitchfork, Drive Like Jehu or even Rocket from the Crypt. Reis and Froberg were also heavily influenced by bands such as The Wipers, Suicide, and Michael Yonkers Band, and these influences gave Hot Snakes a distinctive sound that has been described by one critic as hardcore garage punk. ” The band’s recordings and merchandise were conducted in a “Do it Yourself manner, with Froberg providing all of the artwork and Reis releasing the material via his Swami Records label. Date: Aug 26, 2002. Performers: Hot Snake, Beehive & The Barracudas. Venue: Tulagi, Boulder, CO. Dimensions: 21″ x 9″. Currently we have several of these in stock. All of them are from the same edition of 211 however, the individual print number in the picture may not match what you receive. And learn about me. And my exlusive online store. Sign up for our newsletter. We add products weekly and always offer great deals! Can’t find something? I’ve probably got it or know where to get it. Be sure to add me to your favorites list. The free listing tool. The item “HOT SNAKES, Orig. Concert Poster S/N Lindsey Kuhn, Beehive, Two Headed, Mutant” is in sale since Sunday, February 10, 2013. This item is in the category “Entertainment Memorabilia\Music Memorabilia\Rock & Pop\Artists H\Other Rock & Pop Artists H”. The seller is “oddtoes_posters” and is located in Hayward, California. This item can be shipped worldwide.