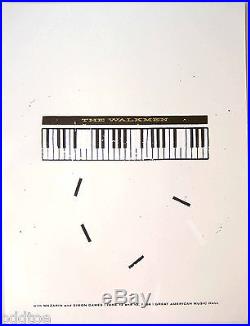 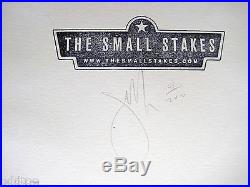 THE WALKMEN with MAZARIN and SIMON DAWES at Great American Music Hall, San Francisco, CA June 12th & 12th, 2006. Original Signed/Numbered Concert Poster by Jason Munn, The Small Stakes. Jason Munn (1975) grew up in Neenah, Wisconsin, but now calls Oakland, California home. He began making posters almost twelve years ago for local venues and independent musicians, designing under the pseudonym The Small Stakes. Since the beginning of 2010 Jason has been working simply under his own name. Jason continues to create posters for shows and tours, while also collaborating on projects with companies and organizations such as the San Francisco Museum of Modern Art, Public Bikes, Best Made Co. Jasons work has been recognized in numerous exhibits as well as print and online publications such as Print, Communication Arts, How, Grain Edit, and Its Nice That. In 2005 he was given a Young Gun award by the Art Directors Club. A selection of his posters are part of the permanent collections at the San Francisco Museum of Modern Art, Denver Art Museum, and San Francisco Public Library. The Walkmen are an indie rock band, with members based in New York City and Philadelphia. The band formed in 2000 with three members from Jonathan FireEaterPaul Maroon, Walter Martin, and Matt Barrickand two from The Recoys, Peter Bauer and Hamilton Leithauser. Bauer attended Maret School in Washington, D. While the other band members attended St. Albans, also in Washington. MAZARIN , are often referred to as Long Island musical legends & Those Slaves to Rock and Roll. MAZARIN continue’s to entertain & set record attendance levels now, into their third decade! Brothers, Doug & Marc have been performing as MAZARIN since 1980. The group has headlined and regularly appeared at major Universities & National concert venues such as My Fathers Place , The Ritz, Tramps NYC, The Supper Club, The Cutting Room, Northstage Theaters, 89 North and many more. MAZARIN was a featured act at the1991 South by Southwest Music conference in Austin Texas. Their seven-year run at The Rumrunner of Oyster Bay is unprecedented in the annals of NY Rock history. Recent performances to overflow crowds at The Legendary Memory Motel in Montauk, NY have generated reviews describing the band as Classic. MAZARIN has shared the stage with the world’s top music acts and has performed thousands of shows in front of hundreds of thousands of loyal fans. Mazarin Released their New album “Live Forever” in The summer of 2013 to RAVE Reviews and heavy radio rotation. The album features singles “Molly Malone, “Make My Car go Faster” “Live Forever” and “Donny. The new album “Live Forever” has been released on ITUNES, Amazon. CDBaby and The Mazarin Website, Mazarinmusic. You can also keep up with Mazarin on their Facebook page Mazarin Rockers and Mazarin. Simon Dawes was a rock band originally from Malibu, California. The band was signed with Record Collection and released their debut full-length, Carnivore, in September 2006. They have two previously released EPs. Blake Mills left the band shortly after Carnivore’s release. The band’s current incarnation is Dawes. An original signed and numbered poster designed by Jason Munn for a The Walkmen concert in 2006 in San Francisco, CA. It is a hand-pulled screen print in excellent condition and from an edition of 200 posters. The band’s name printed atop a keyboard, with a few of the keys pried off and scattered across the page. The poster is stamped, signed and numbered on the back. Performers: The Walkmen, Mazarin, Simon Davies. Designer: Jason Munn, Small Stakes. Signed by the designer. Check out my other items. Be sure to add me to your favorites list. The item “THE WALKMEN- ORIGINAL Signed/Numbered 2006 CONCERT POSTER, Jason Munn, keyboard” is in sale since Tuesday, March 31, 2015. This item is in the category “Art\Art from Dealers & Resellers\Prints”. The seller is “oddtoe” and is located in Hayward, California. This item can be shipped worldwide.