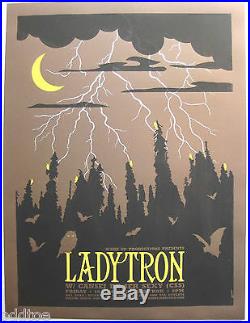 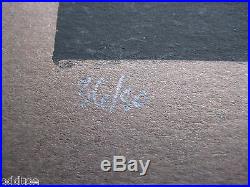 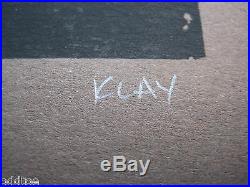 LADYTRON with CANSEI DE SER SEXY (CSS) at The Showbox, Seattle, WA October 13th, 2006. Original Signed and Numbered Concert Poster. By Mike Klay aka Powerslide Design. Mike Clay- Powerslide Design Co. Is the brainchild of Seattle-based graphic designer Mike Klay. A musician and an outdoorsman, his collection of manually screen-printed posters and tees evokes the beauty of nature and the energy of music. Hailing from the South Bay Area in California, I currently reside in Seattle where it doesn’t rain as often as you think. The Pacific Northwest is a frequent backdrop for my art. What began as a silk-screened concert poster has turned into art prints, shirts and other various merchandise. Music has always been a driving force behind a lot of the ideas that Klay puts on paper. In high school he picked up a guitar and learned a couple of notes until he eventually starting laying down beats on a drum kit. After graduating from college and moving to Seattle, there was no way that Klay could play drums in an apartment. Turntables were Klay’s natural progression in music and also a way to keep his neighbors happy. Eventually the turntables became singular and an acoustic guitar was added to the mix. Whether it be the music he listens to while working, the local venues he visits to see various music acts perform, or browsing through one of the many local record shops; music makes him tick. Ladytron are an electronic. Band formed in 1999 in Liverpool, England. The band consists of Helen Marnie. Also known as Marnie. Lead vocals, synths, Mira Aroyo. (vocals, synths), Daniel Hunt. (synths, guitar) and Reuben Wu. Their sound is usually described as electropop. Mixed with new wave. They took their name from the song. According to Brian Eno. Once a Roxy Music member, Ladytron are the best of English pop music. They released five studio albums so far: 604. (2001), Light & Magic. (2008) and Gravity the Seducer. They also issued the live album Live at London Astoria 16.07.08. (2009), the compilation album Best of 00-10. (2011), and the EPs Miss Black and Her Friends. (2006), The Harmonium Sessions. (2006), Ace of Hz EP. History: Liverpool-based producers and DJs Daniel Hunt and Reuben Wu met in the 1990s. Hunt was the founder of the indie record label Invicta Hi-Fi and of a nightclub. Wu trained in Industrial Design at Sheffield Hallam University and graduated in 1997. He became an industrial designer at Team Consulting Limited until 2002. Using the moniker Ladytron, Hunt and Wu recorded the debut single. He Took Her to a Movie. With the guest vocalist Lisa Eriksson who later formed the band Techno Squirrels. He Took Her to a Movie was released in July 1999 and gained positive reviews. CSS (an initialism of Cansei de Ser Sexy) is a Brazilian rock band from São Paulo. The band was labeled as part of the explosion of the new rave scene. An original signed and numbered, screen printed poster designed by Mike Klay (Powerslide Design) for a Ladytron concert in 2006 in Seattle. A nightscape printed on dark brown paper, with trees, birds, bats, dark clouds and a crescent moon. It’s from a limited edition of 80 posters and in very good condition. The signature and number are a little hard to see as they were written with pencil on dark paper. Designer: Mike Klay, Powerslide Design. Signed by the designer. Check out my other items. Be sure to add me to your favorites list. The item “LADYTRON- ORIGINAL SIGNED/NUMBERED 2006 CONCERT POSTER by Mike Klay” is in sale since Saturday, November 26, 2016. This item is in the category “Art\Art Prints”. The seller is “visible_vibrations” and is located in Hayward, California. This item can be shipped worldwide.