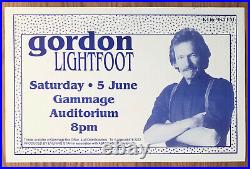 Gordon Lightfoot poster for a show he performed at Gammage Auditorium in Tempe, AZ. The dimensions of this poster are 11″ X 17″. This is a rare original piece of history used for promotion for this show my company produced. This item will be accompanied by a letter of authenticity signed by me. Danny Zelisko started promoting shows in Arizona in the 1970’s, and founded the legendary concert promoting firm EVENING STAR PRODUCTIONS. He has presented, promoted, and produced over 10,000 shows since then. He is an insatiable collector, who put away everything he got his hands on at his shows. Most everything you see here was signed for him, in person! Danny says, “this is a great time to start sharing the collection with true music fans everywhere”. His truly authentic, iconic and personal keepsakes are available to you now for the first time, after being kept under wraps for decades. This item is in the category “Entertainment Memorabilia\Music Memorabilia\Other Music Memorabilia”. The seller is “danny-zeliskos-closet” and is located in this country: US. This item can be shipped worldwide. 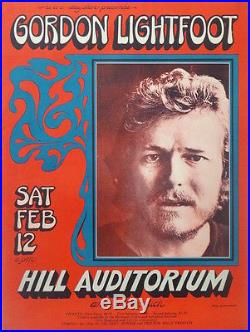 GORDON LIGHTFOOT CONCERT POSTER (1972). Ultra Rare vintage concert poster created for the Folk singer show at the Hill Auditorium in Ann Arbor, MI on February 12th 1972. Unlike their counterparts from San Francisco (Fillmore, family Dog, etc) The Michigan concert posters were printed in VERY small quantities (less than 100) making them extremely rare to find. Art by Gary Grimshaw – check our other Grimshaw posters. Format: 16×22 (41×56 cm). Small tape residue on lower left margin. Will be sent safely rolled inserted in a sturdy cardboard tube. This is one of the many movie and music posters which can be found at ILLUSTRACTION GALLERY – ART THAT POPS! A brand new online poster gallery devoted to the celebration of the poster artists behind the art of the movie, music and comic book. We only sell Vintage and rare posters (no cheap reproductions). Specialized in art by Robert McGinnis , Ray (Raymond Elseviers), Frank McCarthy, Hans Hillmann, David O’Daniel, Todd Slater, Jack Kirby, Jim Steranko, Marvel Third Eye Black light, Rick Griffin… As well as Steve McQueen, Audrey Hepburn, Clint Eastwood, Steve McQueen, Alain Delon, Jean-Paul Belmondo, Sophia Loren, Paul Newman, Raquel Welch and many other actors and actresses and Italian fotobusta (photobusta), Japanese B2 posters, Belgian posters, French posters, Italian fotobusta (photobusta), German A1 posters, Fillmore posters, Family Dog posters, complete set of Munich 1972 Olympics posters and many more colorful images which can be discovered on the site. Watch the other listings. For larger quantities, a separate invoice will be sent. Feel free to contact the gallery for any queries/questions. Thanks for your business. ILLUSTRACTION GALLERY – Art That Pops! The item “GORDON LIGHTFOOT ANN ARBOR 1972 concert poster GARY GRIMSHAW ULTRA RARE” is in sale since Sunday, August 6, 2017. This item is in the category “Entertainment Memorabilia\Music Memorabilia\Folk”. The seller is “illustractiongallery” and is located in New York, New York. This item can be shipped worldwide.