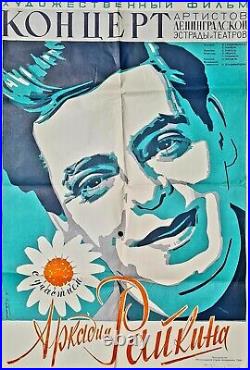 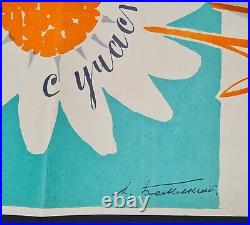 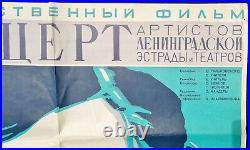 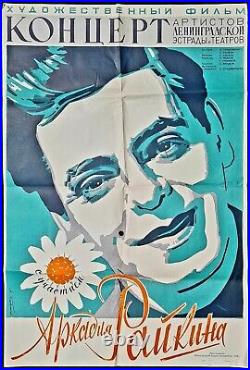 Original Russian film title on the poster. CONCERT OF LENINGRAD VARIETIES AND THEATERS WITH THE PARTICIPATION OF ARKADIY RAYKIN. X 39 = CM: 67 x 99. Original vintage Soviet movie poster. (from the first release of the film in Soviet Union – 15 December 1956) for the film. “Film-concert with the participation of Arkady Raikin and artists of the Leningrad Variety Theater “. Please Note: The poster features great art of Arkadi Rajkin by famous soviet poster artist Anatoliy Belsky. Artists of the Opera and Ballet Theater named after Kirov, artists of the Leningrad stage and the theater of miniatures. Variety concert numbers are not related to the conference. Member of the Union of Artists of the USSR. In 1921 he completed his diploma work – sketches of scenery for AV Lunacharsky’s play “Royal Goodness”. He lived and worked in Moscow. Fruitfully engaged in film posters, made posters for the films “Communist Tube” (1928), “Racer against the will” (1930), “Affairs and People” (1930), “Meeting life” (1930), “Thunderstorm”, “Annenkovshchina” (both – 1933), “Jacob Sverdlov” (1940), “Glinka” (1946; awarded an honorary diploma at the exhibition of film posters in Vienna in 1948), “We are from Kronstadt”, “Big Life” (both – 1949), “Eyes” cinema “(1957), ” The Cradle of the Poet (1958) and others. Anatoly Belsky’s film posters, even in the 1920s and 1930s, are quite traditional, they do not differ in complex, sophisticated compositions and effective techniques – as in NP Prusakov, wild imagination and originality of spatial solutions – as in Stenberg. Even in the 1929 movie poster, the composition is quite simple – the main elements are arranged diagonally, expressiveness is achieved not by complex color and compositional findings, but a strong perspective, contrasting large, voluminous male head and flat urban landscape; dizzying height is emphasized by tiny cars running on the asphalt. The merits of Belsky’s posters are different – they clearly and deeply reveal the main idea, the meaning laid down in the films by their authors “Chapaev”, 1934; “Alexander Nevsky”, 1936; “Girl with character”, 1939; “Georgy Saakadze”, 1943; “Two Fighters”, 1943. The poster of the artist Anatoly Belsky for Mikhail Romm’s film Man? 217, which was released in April 1945, is especially impressive. The courageous face, the angry eyes of the heroine – prisoners of the Nazi concentration camp – capture the attention of the viewer. This movie poster is stunning in its emotional power. In his artistic persuasiveness, tension and sharpness of emotional fervor, he is close to the famous poster of Victor Koretsky Warrior of the Red Army, save! He took part in the design of the Soviet pavilion at the World’s Fair in Philadelphia (1928), the pavilions of the VSHV “Wine”, “Viticulture” (both -1939), “Glavkholod” (1954). In the postwar years he worked on landscapes; created a cycle of landscapes near Moscow. He was exhibited at the exhibition of Soviet film posters (1956), the exhibition “Poster and satire for 40 years in the works of Moscow artists” (1958) in Moscow and others. Belsky’s film posters are represent in the funds of the Russian State Library, in the Museum of Cinema, in large private Russian and Western collections. This item is in the category “Art\Art Posters”. The seller is “soviet.posters” and is located in this country: US. This item can be shipped worldwide.