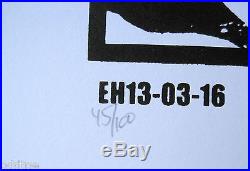 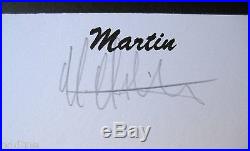 THE REVEREND HORTON HEAT. By Mike Martin – Enginehouse13. EngineHouse13 was formed in the fall 2000 with the idea to continue to produce limited edition concert art and to keep all involved somewhat sane. EngineHouse13’s brainchild, Mike Martin is a dedicated music lover that cranks out some of today’s best and most recognizable limited edition posters and designs in the world. The founding member of EH13, Mike Martin, is the driving force behind the EH13 phenomenon, the creative mastermind and the glue that keeps it all together and running like a well oiled small block! Mike is an avid pop culture, lowbrow art collector and is a car freak with an affliction for the custom and fenderless four wheel wonders. Now in their 9th year as a fully independent studio, the future is getting brighter and greasier by the day! The Reverend Horton Heat is the stage name of American musician Jim Heath (born 1959 in Corpus Christi, Texas) as well as the name of his Dallas, Texas-based psychobilly trio. Heath is a singer, songwriter and guitarist. The group originally formed in 1985, playing its first gigs in Dallas’s Deep Ellum neighborhood. Its current members are Jim “Reverend Horton” Heath on guitar and lead vocals, Jimbo Wallace on the upright bass, and Paul Simmons on drums. Their sound is self-described as “country-fed punkabilly”. Some of their songs could also be described as psychobilly. Their music is a mixture of country, surf, punk, big band, swing, and rockabilly, all played loud and energetically with lyrics that are often very humorous. The band has achieved success within the genre and even in mainstream America with many of their songs being featured in video games and commercials. Stuart Daniel Baker , better known by his stage name, Unknown Hinson , is a comedic country musician, songwriter, and voice actor. He is perhaps best known for his role as the voice of Early Cuyler on the Adult Swim cartoon series Squidbillies. The poster is a screen print, in very good condition, signed and numbered by the artist Mike Martin of enginehouse13 Studios, from a limited edition of 100 prints. B&W images of old-school cars between bright neon panels. This was for a 2003 Reverend Horton Heat show in Columbus, Ohio. Date: May 2, 2003 Performers: Reverend Horton Heat & Unknown Hinson Venue: PromoWest Pavilion, Columbus, OH Designer: Mike Martin – enginehouse13 Dimensions: 13″x26″ Edition: 100 Screen Print Check out my other items. Be sure to add me to your favorites list. The item “REVEREND HORTON HEAT- ORIG 2003 Concert Poster s/n by Mike Martin enginehouse13″ is in sale since Friday, March 13, 2015. This item is in the category “Entertainment Memorabilia\Music Memorabilia\Rock & Pop\Artists J\Other Rock & Pop Artists J”. The seller is “oddtoes_posters” and is located in Hayward, California. This item can be shipped worldwide.